On WordPress.com we average 23 million actions per day that trigger indexing 75 million Elasticsearch documents into hundreds of indices. Users cause these actions by making changes to the data in more than 1 billion MySQL tables, which we mirror into our many Elasticsearch indices. Keeping data correctly mirrored between MySQL and Elasticsearch, where both are distributed across multiple data centers, gets pretty complex.

We get asked about the details of this process (usually when something appears to be going wrong), and we’ve made a lot of improvements over the past six years. Our system is a moving target, but to the extent that prose can describe code that coordinates thousands of servers, this post outlines our current system.

I’m going to focus on indexing posts/pages since that comprises most of our data, but we index many other document types that follow the same process. The steps of the process are:

Indexing a single post takes between one and thirty seconds to accomplish assuming there are no errors. In cases where we’re reindexing a site with millions of posts, it can take hours to synchronize Elasticsearch and MySQL.

Let’s look at each of these stages in detail.

This is pretty simple, although the change could come from many different sources:

All of these somehow make their way to a WP.com web server, where they trigger one of the 68 WordPress actions/filters that we use to initiate indexing. 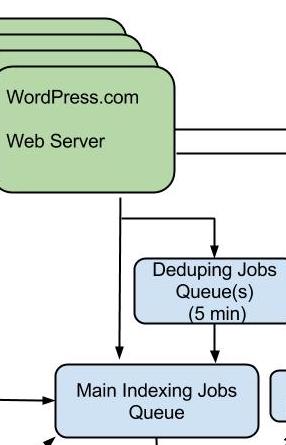 Because a single WordPress process could trigger many indexing jobs, all the indexing jobs go into an in-memory queue. There, we dedupe the jobs and optimize them. (For example, if 10 posts get changed we put them into a single job rather than 10 separate jobs.) Then, we add these jobs to a MySQL queue for indexing jobs on the WP shutdown action (runs at the end of every WordPress process).

Longer running jobs are submitted to a separate queue so we can dedupe them across multiple web servers. This way, if a user’s action requires us to reindex all of their posts, and then they immediately take another action that also triggers reindexing all the posts, we will only run a single job.

For high volume/busy blogs we sometimes convert jobs to just bulk reindex everything. For example when a user changes the name of a single tag we submit a job to only reindex the posts that have that tag. But if a user (or a script) changes 10 tags in less than 10 minutes, then we convert those jobs into a single bulk index job.

The main jobs system (built on a MySQL queue) runs jobs (mostly) in order, with a slight preference for higher priority jobs. We prioritize changes to single posts above bulk changes to many posts. The jobs system also imposes a slight delay on the jobs (milliseconds) to give the the database and memcache time to sync between data centers.

Each indexing job runs as its own WordPress process for the site to ensure we have the correct data. This means loading the correct theme and loading custom post types code. Because of the many customizations possible in WordPress code, it’s not sufficient to look only at the database to get the data correctly prepared for indexing.

All indexing jobs run a number of checks when they start:

Assuming those checks pass, we start indexing posts based on job type. Some jobs index/delete/update a single post; others index/delete many posts on a blog.

Once a document has been sent to Elasticsearch, it still takes time before it’s available in search results. Our indices’ refresh rates are set to one second for all of our blog indices (one exception is the ES index powering the WP.com Reader which has a 30 second refresh).

A number of errors can occur while a job runs:

Of course, when things go wrong the error rate can jump, and the same code that handles “normal” errors also handles cases where many servers or an entire Elasticsearch cluster is non-responsive (hardware failures or network failures).

If an Elasticsearch error does occur, the indexing job sees the error, and based on the error code, may mark the Elasticsearch server down (stored in memcache) so that other jobs won’t try to query/index that server for a few minutes. This further attempts to prevent indexing errors due to transient network connectivity or server issues. These events are pretty bursty; some days no servers are marked as down, other days, it happens 10-20 times in a day.

A retry occurs when we expect a job’s error may resolve itself soon; for example a http error, a database error, or a timeout.

In these cases, we use the indexing job retry code:

We do a few hundred retries an hour with spikes if there’s some indexing/cluster event going on. We add a very small number of jobs to the indexing retry queue. This really only happens during significant cluster events. Of 23 million jobs a day, we typically retry about 20k jobs a day (0.087% of all jobs).

This queue handles the cases where a job fails completely, or something is so wrong with the clusters that we need to stop indexing. Job failures are spiky, and typically driven by fatal errors due to bad deploys. On normal days, we see 10 to 100 failed jobs.

We have an hourly cron job that looks at failed jobs each hour and sticks them into the Failed Jobs Queue. This queue currently consists of a table of blog_ids and the indices that those blogs should be reindexed into. Six times a day, a cron job empties up to 1000 sites from the queue. Effectively blogs that experience fatal errors or some other repeating failure to index should get back in sync with the database within 4 hours.

So how long does it take for a change to reach Elasticsearch?

We don’t have full end-to-end instrumentation, and in the rare cases where an error occurs, the time can increase, but let’s look at the typical times for a couple of examples.

For many cases the slowest part of an “update” is actually waiting for the Elasticsearch query caching to timeout. We cut our query volume in half (and greatly reduce query latency) by caching all Elasticsearch queries in memcache. The cache timeout depends on the particular application. For most search applications it is between 30 seconds and five minutes. Jetpack Search has a two minute cache timeout. For services such as related posts, we have a 48 hour cache timeout.

Our indexing system has been iterated on for almost six years and continues to get better. We’re constantly learning how to run a better service. One multi-datacenter caching problem we solved in 2013 led me to this great quote from a Facebook paper about replication across data centers:

We treat the probability of reading transient stale data as a parameter to be tuned, similar to responsiveness.

Elasticsearch mirrors our database, so just like a cache, our ES data will always be slightly stale relative to new changes to the database. By focusing on tuning the probability of not having stale data we reduce the likelihood of stale data affecting the user experience.

The indexing system we have today is significantly improved from what it looked like one year ago. We expect those improvements to constantly continue, year after year, as we find gaps we have missed, or reduce the gaps we are already aware of.